Welcome to the forum of Scotland's biggest, oldest and best distributed computing team.

In the list of Raspberry Pi contenders there's a new kid on the block: ASUS, a well-known name in hardware land.

The sheer user base and abundance of hardware and software made for the Raspberry Pi keep even their CPU/SOC-wise older models (A, A+, B, B+ and Zero) in the running while the Raspi 2 and 3 were leaps forward enough to leave most of their competitors without market share.

Let's take the Hummingboard/Cubox. In theory much faster solutions, based upon single, dual or quad core ARM Cortex-A9 based SOCs and, in their original Hummingboard form, using the same dimensions as the Raspberry A and B. With the advent of the B+ those dimensions meant zilch and with the advent of the Quad-core Pi 2 (for a mere quarter of the price of a quad core Hummingboard) SolidRun appeared to have made a solid mistake with their pricing model. The Dutch importer even didn't want me to sell a quad-core Hummingboard. Now that's marketing, playing too hard to get.

Only the Korean Odroids seem to be able to make a slight dent into the Raspberry market share. Their Odroid C1 (and later C1+ model) is based upon a ARM Cortex-A5 quad core that is clocked significantly higher than boards of competitors and both software- and hardware-wise the support is reliable, a point that sets them apart from most other fruity pi's (Orange Pi, Banana Pi, etc). Their new Odroid C2 is based upon a Cortex-A53, as is the Pi 3, but with double the memory and ready for 64-bit OS-es, of which one has surfaced so far (Suse Linux/ARM).

Where does ASUS fits in in all this? The Tinker Board uses a quad-core Cortex-A17, which is 32-bit but which is a better CPU than the Cortex-A7 of the Pi 2. In fact it is a well-known SOC around this forum, as it is a Rockchip RK3288 SoC clocked at 1.2GHz (I even saw 1.8GHz), which according to the company's own GeekBench run, is around twice as fast as the BCM2837 chip found on the Raspberry Pi 3 running at the same clock speed with all four cores running. Aside from the stronger processing power, the Asus Tinker Board also features a 1Gbps Ethernet port and the ability to decode 4K H.264 video content. It also has 2 GB of RAM, like the Odroid C2 and costs around £55.

#2 Re: ASUS Tinker Board

#3 Re: ASUS Tinker Board

A not-so-enthusiastic review of the Tinker Board, which seems to have been pulled from the market since.
Explaining Computers.com takes on the Tinker Board
Tinker board made it to Wikipedia
Last edited by Dirk Broer on Mon Nov 04, 2019 3:34 pm, edited 1 time in total.
Top

#4 Re: ASUS Tinker Board 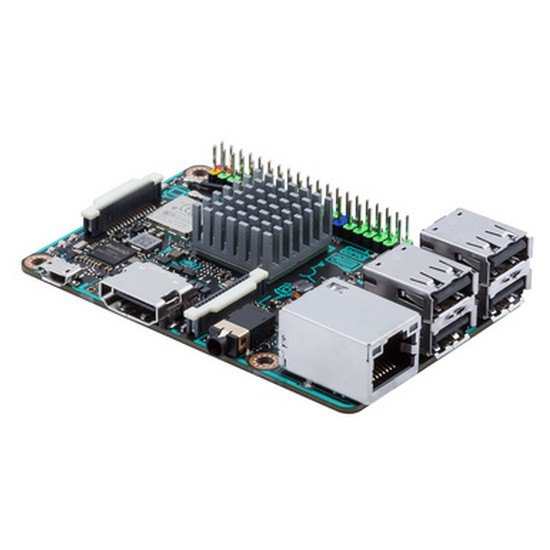 The main difference being the standard onboard 16GB eMMC. Looks like you'll get a free heat sink too!
Top

#5 Re: ASUS Tinker Board

Users browsing this forum: No registered users and 2 guests